After a two-week break, including a nine-day vacation, I am back to blogging. Let me start with Sunday Reads.


The Economist has a terrific cartoon on the Edward Snowden affair, with the U.S. (Uncle Sam) and Russia (Bear) engaging in a diplomatic war of words. 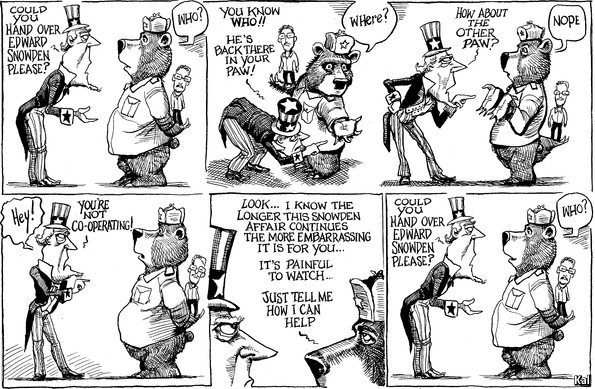 
One night in the House of Commons, Churchill, after imbibing a few drinks, stumbled into Bessie Braddock, a corpulent Labourite member from Liverpool. An angry Bessie straightened her clothes and addressed the British statesman.

"Winston," she roared. "You are drunk, and what’s more, you are disgustingly drunk."

Churchill, surveying Bessie, replied, "And might I say, Mrs. Braddock, you are ugly, and what’s more, disgustingly ugly. But tomorrow," Churchill added, "I shall be sober."


Napoleon was involved in conversation with a colonel of a Hungarian battalion who had been taken prisoner in Italy. The colonel mentioned he had fought in the army of Maria Theresa. "You must have a few years under your belt!" exclaimed Napoleon. "I'm sure I've lived sixty or seventy years," replied the colonel. "You mean to say," Napoleon continued, "you have not kept track of the years you have lived?"
The colonel promptly replied, "Sir, I always count my money, my shirts, and my horses - but as for my years, I know nobody who wants to steal them, and I shall surely never lose them." 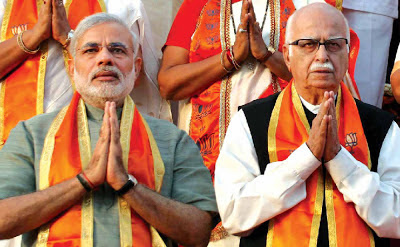 Narendra Modi's imminent elevation to the poll chief position is causing considerable heartburn in the Bharatiya Janata Party, the so-called 'party with a difference'.

Modi's main detractors in the party are: Lal Krishna Advani, Sushma Swaraj, Rajnath Singh, Arun Jaitley, and Yashwant Sinha. So, how are they reacting to Modi's elevation?

Advani is sulking. Sushma is angry. Rajnath is wearing a plastic smile. AJ, being a legal eagle, is the proverbial cat on the wall. And Yashwant, the eternal dissident, sitting in a corner.

The one person who stands to lose most from Modi's elevation is Sushma Swaraj. She is seen as a mass leader with great oratorical skills. A highly emotional person, soon after the 2004 elections when the Indian National Congress was set to form the government at the Centre, she threatened that if Sonia Gandhi ever became the prime minister, she would shave her head, wear a white saree and eat groundnuts - all symbols of mourning in certain sections of our society. And yes, she is the same Sushma who was very close to the Karnataka Reddy Brothers (yes, the same mining robber barons), till they were arrested.

A huge mass base is an important measure of a politician's standing. Given their lack of mass political base, the trio of Rajnath Singh, Arun Jaitley and Yashwant Sinha could be discounted.

What is hard to fathom is the attitude of L. K. Advani. Given his long political career, his unwillingness to face hard facts today is both perplexing and astounding. There is not an iota of doubt that, along with A. B. Vajpayee, he has played an equal, if not greater, role in transforming the BJP from a marginalized political party into one of the two major parties at the national level.

Why is Advani sulking? Is it a simple case of jealousy? Does he see Modi as an usurper of his throne? Or does he believe that he has the supreme right to the prime minister's post as and when the BJP (read NDA) storms to power?

I think Advani (and his supporters) failed to read the writing on the wall. More than Modi, it is Advani who is a polarising figure. It was Advani who launched the rath yatra that culminated in the destruction of the Babri Masjid. It was Advani who always talked about building a Bhagwan Ram mandir in Ayodhya, an anathema to the largest minority.

If Muslims see Advani like this, then how does the Rashtriya Swayamsevak Sangh (RSS), BJP's ideological parent, see him?

On a visit to Pakistan, Advani, in a vain bid to shed his Hindu hardliner image, called Mohammad Ali Jinnah a "secular" leader, a remark that caused massive consternation in the RSS-BJP camps. The RSS might have forgiven Advani for the remark but it has not forgotten the episode.

Advani should also realise that the Indian electorate has moved on; it is no longer besotted with issues like building the Bhagwan Ram mandir; rather, the electorate, majority of whom are younger than 45 years of age, is concerned about development, employment, economic opportunities, inflation, basic infrastructure (like power and roads) and improving the overall quality of life.

One major line of thought against elevating Narendra Modi is that it will cost the BJP the Muslim vote. This approach begs one simple yet important question: were Muslims ever the targeted vote bank for the BJP? While it is true that Muslims have not been the traditional vote bank of the BJP, the party got nearly 31% of the Muslim vote in Gujarat, which effectively rebuts the polarising argument. So much for the argument that the Muslims of Gujarat will not vote for Narendra Modi.

One simple question: do all Hindus always vote for the BJP? As the answer is a resounding NO, then where is the merit in the argument that Muslims do not vote for the BJP.

Advani may sulk but he knows that he is no longer in the reckoning for the top job. He has played his part very well in building the party. Now, rather than sulk and pout, he should welcome the elevation of Narendra Modi.

If Advani does not do it, then he risks gaining the tag of a "sore loser". Not the kind of a tag he would love to gain in the twilight of an illustrious political career. 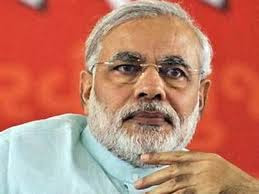 Narendra Modi evokes extreme reactions. Those who love him do not brook any criticism of their leader; on the other hand, his detractors detest him for whatever they stand for.

Criticism against Modi is person-centric and mostly rooted in vote-bank appeasement politics; his critics allege that Modi is a staunch Hindutvavadi who ill-treats minorities. But Modi's admirers bemoan the opportunistic politics of the Indian National Congress and other so-called secular parties.

In his brilliant First Post article titled 'The hypocrisy of Narendra Modi's detractors', R. Jagannathan says that "more than anything else, our attitudes to Narendra Modi tell us more about ourselves and our hypocrisies than about him".

Those who refuse to believe this BJP-is-communal-Congress-is-secular line have an additional argument against Modi: his unwillingness to apologise or express regret for the administrative failures in 2002.
The counters to this argument are several. Has the Gandhi family apologised for even 1984, leave alone all the scores of riots that happened from 1947 to 1998, before the BJP came to power at the centre? Has any party, at state or centre, done so even now? CPM for Nandigram, the SP for the 8-10 minor riots in Uttar Pradesh after its return to power?
An apology is relevant only when it is real – not something offered as a political concession. And this Modi has indirectly offered through the Sadhbhavna fasts and silent efforts to reach out to some Muslim groups in Gujarat. I suspect believe that these efforts to reach out may be more meaningful to Muslims than fake apologies and hypocritical behaviour.
Read the complete article here.

Turkey, once nicknamed the Sick Man of Asia, is facing massive unrest. Here's CNN's veteran journalist Christiane Amanpour explains the state of politics in Turkey to understand the ongoing civil unrest there.


The Hindu's Open Page has an interesting collection of anecdotes. Here's one:

Atal Bihari Vajpayee was another politician who regaled audiences with his humorous remarks. During an election meeting in Gujarat, Prime Minister Indira Gandhi told the gathering that she was a daughter of Uttar Pradesh and daughter-in-law of Gujarat and was seeking votes on that basis. Vajpayee later said Mrs. Gandhi had forgotten to say that she was also the mother-in-law of Italy. The audience had a hearty laugh and one journalist later wrote that this humorous remark of Vajpayee had brought the BJP a lot of votes.