South Sudan is in the grip of terror. Click on the link below for an interactive explanatory graphic.

Sunday Reads - Cows might fly & In praise of micromanagement

Year-end bonus: Best photos of 2013 from FP.
No comments:

The Explainer: The Sri Lankan Ethnic Conflagration - Part I

A few weeks back, I promised the readers of this blog an Explainer on the Sri Lankan Conflict. The issue became topical in the light of the Indian Prime Minister’s refusal to go to Colombo for the CHOGM Summit in November 2013. The GoI stated that the refusal was on account of the discriminatory policies adopted against the Tamil community by the Sinhala-dominated Sri Lankan Government.
In the first of the two-part Explainer on the Sri Lankan Crisis, I will focus on the demographics of the island nation, the genesis and evolution of the conflict between the Sinhala and Tamil communities, and various other contributing factors that contributed to the present critical situation.
The conflict between the Sinhala and the Tamil communities has dominated Sri Lanka’s modern history. Ever since the utterly destructive conflict broke out in the 1980s, it has come to shape and define an entire generation of Sri Lankans. It has also charted every aspect of the island nation’s politics, society, culture and economy.

The Sinhalese are mostly found in the country’s south, west, centre, and east while the Tamils are found mostly in the north and east of the island. Of the total population of 20.26 million (Census 2012), about 74.9 per cent are Sinhalese (Buddhists), 11.2 per cent are Sri Lankan Tamils, while Muslims (9.2 per cent), Indian Tamils (4.2 per cent) and other minorities make up the rest.

Seeds of conflict
There is a well-documented trail of Tamil migration to the island of Sri Lanka. The pace of Tamil migration accelerated in the 19th and early part of the 20th century when the British brought in thousands of Tamil labourers to work on the island colony’s tea plantations. In due course, these labourers came to be known as Estate Tamils.

This was the classic British policy of Divide and Rule at work: prop up the minority Tamils against the British-hating Sinhalese. This was the British colonial way of negating the economic and political influence of the Sinhalese. As was expected, this large scale migration bred resentment in the majority Buddhist Sinhalese community; they viewed it as British favouritism toward Hindu Tamils at their cost.

Sinhala Buddhists claimed that the Tamils, under the British, received special treatment. This, they say, could be seen, even today in the large number of British-built schools in the Tamil-dominated north and east. With better access to education, the Tamils came to dominate government jobs, especially in the fields of civil service and law enforcement agencies.

Rise of Sinhala Chauvinism
After Sri Lanka gained independence, an assertive strain of Sinhala nationalism stoked the fire of ethnic division until it all erupted in a major conflict in the 1980s between the Tamils pressing for self-rule and the Sinhala-dominated government.

The genesis of the conflict can be traced to the ‘Sinhala Only’ language campaign in the mid-1950s. As they say, one man’s freedom fighter is another’s man terrorist, so is the case here.

The Sinhala Act of 1956 restricted government employment to Sinhala speakers only. It also made radical changes in university admission rules, which effectively reduced the number of Tamils entering higher educational institutes. The Tamils accused the Sinhala government of being discriminatory by implementing anti-Tamil measures, thus effectively reducing them to second-class citizens.

Sinhala chauvinism led to large-scale violence between Tamils and the Sinhalese. The spectre of ethnic violence forced the Bandarnaike government to enter into a deal with S. J. V. Chelvanayagam, who led the Federal Party, the main party of the Tamils. The so-called ‘B-C Pact’ provided for equal status to Sinhala and Tamil languages. As well, it released greater powers to the local provincial councils in the Tamil-dominated north and the east of the island.

Other Sinhala parties, in the Opposition, cried foul and played to the Sinhala gallery when they accused the government of a sell-out of Sinhala interests. Renewed ethnic violence claimed hundreds of lives. Fearing a Sinhala backlash, Bandarnaike, a Christian who converted to Buddhism, repudiated the ‘B-C Pact’ in 1958. However, the next year, the spectre of the alleged sell-out of Sinhala interests claimed Bandarnaike’s life when he was assassinated by a radical Buddhist monk.

Fanning the flames
Following an agreement between India and Sri Lanka, a number of estate Tamils were disenfranchised and repatriated to India in the 1960s and 1970s. The repatriation was high enough to bring down the Tamil population from 33 per cent to 25 per cent. This severely dented the confidence of the island’s Tamil community.

Another piece of Sinhala affirmative action reduced intake of Tamil students into educational institutes. For instance, after this, the proportion of Tamil faculty in medical and engineering colleges fell to less than 25 per cent in 1974, from a peak of 78 per cent in 1969. The large-scale settlement of Sinhala and Muslims in Tamil-dominated areas also helped widen the social and cultural chasm between the Tamils and the other communities.

In 1972, the Sinhala-dominated government made Sinhala the country’s ‘only’ official language and also decreed that Buddhism be accorded the foremost place. In this context, it would be relevant to state that while other religions were to be treated with equal respect, Buddhism would still be the primus inter pares, i.e., first among equals.

Violence of identity
If you are familiar with these aspects of the Sri Lankan crisis, then you must have heard of the Jatiya Sevaka Sangamaya (JSS).

Jatiya Sevaka Sangamaya (JSS) was a trade union, led by a radical Sinhala-speaking minister. The JSS, a fiercely anti-Tamil outfit, accused the Tamils of controlling all economic power by holding levers of trade and commerce. The JSS’s core belief was that while the Tamils have India to go to, the native Sinhalese have only the island as their home.

Political observers opine that the JSS imparted a nationalist ideological angle to the disadvantaged and marginalised sections within the Sinhala society, who, till then, had only a shaky sense of identity.
It is true that a sense of identity—individual as well as communal—is one of the most fundamental aspirations of the elements of a society. An individual’s identity is defined not just by her personal beliefs but also by her presence in the community. A social and communal (group) identity masks the individual’s (often weak) personal identity; this is especially true of individuals who come from the disadvantaged sections (both economic and social) of the society.
In the light of these ideas, we can understand a basic strain of the Sinhala-Tamil conflict: a majority of Sinhala who opposed the Tamils hailed from socially and economically marginalised sections of the Sri Lankan society.

End of Part I of The Explainer: The Sri Lankan Ethnic Conflagration. The second part of this Explainer on the Sri Lanka Conflict will appear sometime in the next two weeks.
3 comments:

This edition of Sunday Reads features interesting stuff related to the world of MBA and management.
No comments:

Sunday Reads - The art of dying & A graveyard for homosexuals

The Supreme Court verdict on outlawing homosexuality has stirred up a raging debate across the country. While I do not agree with the SC verdict, especially after it overturned the Delhi High Court judgment, I think the SC judges, barring the deprecating moralistic tone, were only stating the current law as it exists. (You can read the SC verdict here.)

Let me cite the provision in Section 377. It talks about Unnatural offences and lays down that, “Whoever voluntarily has carnal intercourse against the order of nature with any man, woman or animal, shall be punished with imprisonment for life, or with imprisonment of either description for term which may extend to ten years, and shall also be liable to fine”.

I personally think being a heterosexual or homosexual or bisexual is a matter of personal choice; it may not appear to be as simple as liking a particular flavour of ice-cream but don’t you think it is JUST that? What two people do in sex, homosexual or heterosexual, is in the order of things (read Nature), as long as it is consensual.

However, let me also state that I am against any kind of sexual activity, homosexual or heterosexual, against minors or anything without consent (among adults).

In her incisive piece for the Indian Express, Ruth Vanita, co-author of Same-Sex Love in India: A Literary History', writes that: “The judgment claims that Section 377 only criminalises certain acts, not categories of people, such as gay people. However, if penile-vaginal sex is the only type of sex allowed, gay people are automatically condemned to celibacy. Without citing evidence, the judgment states, "Those who indulge in carnal intercourse in the ordinary course and those who indulge in carnal intercourse against the order of nature constitute different classes." This is incorrect; many heterosexual married couples enjoy anal and oral intercourse (outlawed by Section 377) along with penile-vaginal intercourse. Judges who read the fourth-century Kamasutra will discover that.”

Some of us may not like same-sex relations but then should we turn against those who profess and believe in such relations? Wither freedom of choice?

Why do we love gold?

Since time immemorial, gold has fascinated Indians. Indians love gold for its investment value (considering the inherent store value and for being a great hedge against inflation/currency depreciation), its cultural significance, and its symbolic value in terms of its demonstrative effect in the society.

But the question is, why only gold and why not any other metal? An interesting article, published on the BBC Magazine website, attempts to answer this important question.

Both are scarce but not impossibly rare. Both also have a relatively low melting point, and are therefore easy to turn into coins, ingots or jewellery.

Silver tarnishes - it reacts with minute amounts of sulphur in the air. That's why we place particular value on gold.

It turns out then, that the reason gold is precious is precisely that it is so chemically uninteresting.

Gold's relative inertness means you can create an elaborate golden jaguar and be confident that 1,000 years later it can be found in a museum display case in central London, still in pristine condition.

So what does this process of elemental elimination tell us about what makes a good currency?

Its nice to be back to blogging after a month. We start with Sunday Reads.


BRIC stands for Brazil, Russia, India, and China while MIST stands for Mexico, Indonesia, South Korea, and Turkey. Here's a comparison between the two emerging groups, from Reuters. 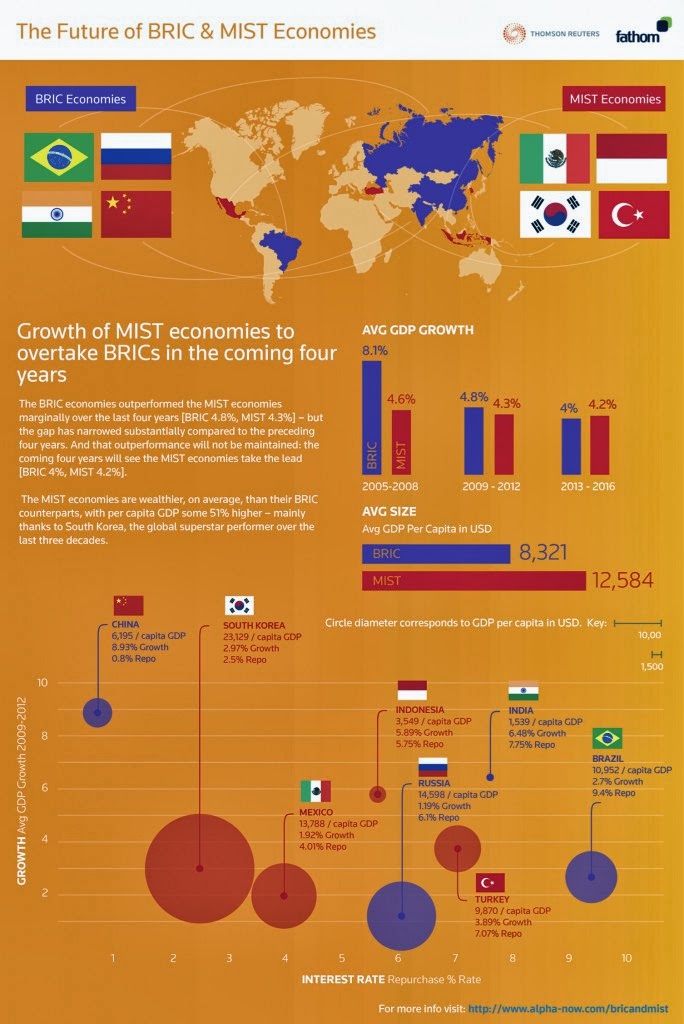