Oscar Wilde claimed he could discuss any subject at any time prepared or not. A companion once took him up on this claim, asking that he discourse on the subject of “The Queen”.

Responded Wilde: “The queen is not a subject.”
No comments: Links to this post

Sunday Anecdote: In 1898, young Albert Einstein applied for admission to the Munich Technical Institute and was turned down. The young man, the Institute declared, "showed no promise" as a student. By 1905, he had formulated his special theory of relativity.

The Explainer: What if Bashar Al-Assad Goes? 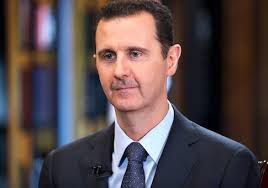 There has been loud condemnation from the international community against Bashar’s atrocities against his countrymen. Efforts by the Unites States, EU and Israel to impose punishing sanctions against Bashar’s regime have been, on several occasions, stymied by Russia and China.

In the last week of September this year, Russia launched massive strikes against the Islamic State strongholds, thus bolstering its presence in West Asia and raising the stakes for a new power game (some analysts compare the ongoing tussle between the U.S. and Russia as the beginning of a new Cold War) in the region.

Russia has ignored the protestations of the U.S., the European Union, Turkey and Saudi Arabia in lending military and logistical support (fighter troops, combat aircraft, helicopters, and tanks) to the beleaguered regime of Bashar Al-Assad. Vladimir Putin, the Russian President, has vowed to back Bashar Al-Assad against what he called “terrorist aggression” of the Islamic State/Daesh.

What if Bashar goes?
There is great anxiety in the United States, EU, Israel, Saudi Arabia, Iran, and Lebanon about the outcome of this conflict in Syria.

Will Bashar al-Assad end up like Zine El Abidine Ben Ali of Tunisia, Hosni Mubarak of Egypt, Muammar Gaddafi of Libya, and Ali Abdullah Saleh of Yemen? If yes, what will be the impact of such development?

If Bashar al-Assad is booted out of power (either by the U.S.-led forces or by the Islamic State terror group or by a combination of circumstances), then we should consider the impact of such ouster on:

·         the Islamic State, which will emerge as the biggest political force, with a stupendous capacity to terrorise the civilians and spread its tentacles in West Asia, including in the immediate neighbourhood;
·         Syrian domestic politics, which has no credible opposition except for an umbrella moderate rebel body which is beset with infighting among its various constituent parties;
·         neighbours like Iran, Iraq, Lebanon, Israel, Saudi Arabia, and Turkey;
·         dictators with absolute power in the wider Arab World (like King Hamad of Bahrain);
·         global economy, which might witness revival problems because of energy supply disruption and spike in oil prices in case the conflict takes on a regional shape;
·         rise of Islamists, like the Muslim Brotherhood in Egypt and the Ennahda party in Tunisia, and
·         strategic realignment, especially with regard to the role of the United States in the wider Islamic World and West Asia.

I will discuss the ongoing tussle between Russia and Turkey in another piece.