The Explainer: What is the Govt's Contingency Fund?

No money from the Consolidated Fund of India can be spent by the Government without approval of the Parliament of India.

What is the Contingency Fund of India?
Contingency means ‘unforeseen’ or ‘emergency’. As mentioned above, all withdrawals  from the Consolidated Fund of India require prior approval of the Parliament.

However, sometimes there are emergency expenses for which the Government may not wait for the Parliament’s approval; like, expenses incurred to tackle a devastating flood/earthquake.

However, after the Parliament approves such expense, an equal amount is withdrawn from the Consolidated Fund of India to be put back into the Contingency Fund of India.

What are Public Accounts?
Public Accounts hold money that does not belong to the Government of India. Such accounts include the Employees Provident Fund and Small Savings Scheme. This money belongs to the general public but is held in Government’s trust.

Whenever withdrawals are made from such accounts, the Government pays out the amounts without the Parliament’s approval.

The complete collection of my Explainers on matters of politics and economics.

List of disputes between China and the U.S.
http://www.bjnocabbages.com/2017/01/the-explainer-list-of-disputes-between.html

What does the Budget consist of?
http://www.bjnocabbages.com/2017/02/the-explainer-what-does-budget-consist.html


Who are bulls, bears, pigs and chickens? (Stock Markets 2) http://www.bjnocabbages.com/2011/07/explainer-stock-market-part-ii.html


Why a Fiscal Deficit is dangerous?
http://www.bjnocabbages.com/2015/03/the-explainer-why-fiscal-deficit-is.html


The Rise of the Islamic State http://www.bjnocabbages.com/2015/10/the-explainer-rise-of-islamic-state.html


What if Bashar Al-Assad Goes? http://www.bjnocabbages.com/2015/12/the-explainer-what-if-bashar-al-assad.html

The Explainer: What does the Budget consist of? 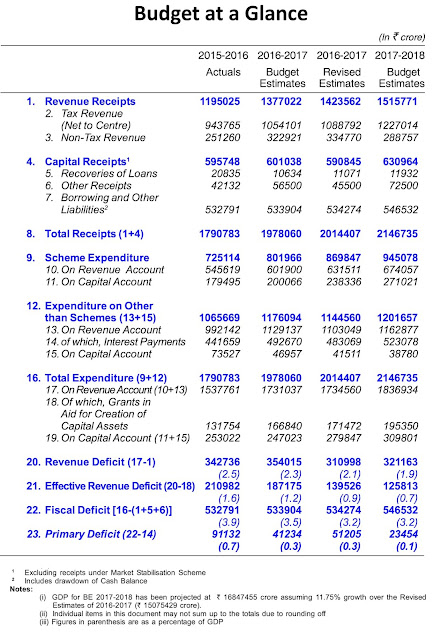 Budget Estimates (BE) relate to the figures which the Finance Minister set out in his Budget Speech last year (i.e., on 28 February 2016) for the Financial Year 2016–17.

In the fourth and last column, you will find Budget Estimates for the coming Financial Year 2017-18. These figures reflect the various estimates made by the Government in terms of Receipts (including tax collections) and Expenditures (including interest payments and salary payments to government employees).

Also read The Explainer: What does the Budget consist of?

In India, there is hardly any economic event that captures popular imagination as much as the Union Budget. In this Budget series, The Explainer will focus on the complex budget jargon that puts off even 'interested-in-budget' souls.

What is a Fiscal Year?
Any twelve-month period that is used for submission of accounts, taxation purposes and to state financial reporting by private and public sector companies is called a Fiscal Year.

In India, the Government has laid down the provision that the 12-month starting on April 1 and ending on March 31 of next year will be treated as a Fiscal Year.

(a) After presentation, the Budget is tabled in the Parliament where members of both the Houses would debate the various provisions listed in the Budget. This would require a few days of debate and discussion.

(b) Also, after such budget debate, any amendment to the original provision (like increasing or decreasing the allocation for a said ministry/program and rolling back any budget proposal) will have to be tabled, discussed, passed, and brought into law by the Parliament.

(c) Also, the administrative system, especially in case of tax administration, would need to be geared up to reflect any change in the financial, taxation or any other system.

What is the Economic Survey?
The Finance Minister's Budget Speech contains two major components: Part A and Part B.

Part A of the Speech contains the Economic Survey while Part B comprises the Union Budget Speech.

The Economic Survey is tabled by the Ministry of Finance in the Parliament along with the Union Budget.

What is the Budget?
So while the Economic Survey is an assessment of the performance of the Indian economy in the fiscal year gone by (i.e., the one that ends on March 31 this year), the Union Budget is a statement of revenues and expenditures for the coming fiscal year, i.e., the one that starts on April 1 of this year.

The second part of this Explainer will appear tomorrow.
No comments: Links to this post