Sunday Reads - How safe is your daughter & In the dark

India is obsessed with films. Not surprisingly, India is home to the largest film industry in the world. Some films hold a mirror to the happenings in the society; for some, films provide an escape into fantasy from the same harsh realities.
But can films shape a nation’s destiny? Yes, says Nadeem Paracha, a columnist for Pakistani newspaper, Dawn. In an interesting and humourous piece titled, Evil Popcorn, Paracha picks three Pakistani films made in the 1980s and 1990s, and shows how they both shaped and reflected the deepening of the Jihadist mentality in the Pakistani society.
Here’s an excerpt:

I went looking for them to investigate a possibility of finding the cultural roots of what grew into religious and ideological extremism and myopia in Pakistan.

One can pin-point almost all of Ziaul Haq’s Machiavellian farce in the name of Islam as containing the main roots of the social and political extremism that now plagues the nation.

I will not go into the academic and scholarly details of this observation, but rather discuss the issue by reviewing the three films that I rediscovered. Two were made and released in the 1990s and one in 1980. They are interesting examples of the kind of mindset that many common Pakistanis started to develop at the conclusion of the anti-Soviet ‘Afghan jihad’ in the late 1980s. (End of excerpt)


China’s middle class is growing, and growing big. Almost all demographic estimates point to a startling statistic: by 2030, the size of China’s middle class will be more than 700 million, the largest in the world. It is believed that currently 25% of the overall population is middle class while in urban areas the number goes up to nearly 40%.

As more people move up the income ladder, consumer spending will only increase. As we know, it is the nouveau riche class which is aspirational and has a consumerist bent of mind. In other words, higher disposable income (greater purchasing power) will only make for greater discretionary spending, which means big bucks for global brands.

Ever since the Chinese government opened the economy in 1977, economic development has more or less been concentrated in the eastern parts of the country, especially along the east coast. As manufacturing boomed, it attracted migrant workers from the less-developed western areas and the large hinterland. The consistently high economic growth rates over the last three decades brought wealth and riches to the urban classes, thus raising the economic status of hundreds of millions of Chinese. 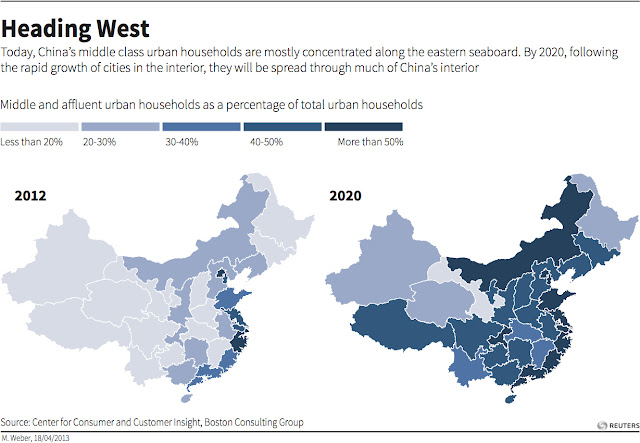 Sunday Reads - The Martian Chroniclers & Getting behind Israeli frankness

This Sunday's installment of some interesting reads.
No comments:

How did gender roles originate?

In most conservative societies, including India, there is a great deal of rigidity concerning the roles of men and women in various walks of life. There are thin red lines that either sex should not cross, especially in social and economic matters. So, how did this demarcation of roles between the sexes happen?

"Millions of years ago our ancestors began to colonise what Seabright terms "a very risky evolutionary niche: the long childhood". This needed more cooperation between the sexes in order to ensure the survival of the offspring, and sex became not merely reproduction but also a cooperative venture.

"We all know the profound differences between male and female sex cells. Women's are large, scarce and relatively expensive to make. Men's are small, abundant and cheap to manufacture. Because of the relative scarcity of women's eggs, and their costliness once fertilised, women have to be selective about the source of the sperm. A woman carries and nurtures the foetus in her body for over nine months. Once the baby is born, she has to feed and protect the child for a long time afterwards. She does not want to waste her opportunities on unsuitable men; they have to be screened out. So we have female selectivity on the one hand and male persistence on the other hand." (End of excerpt)


Sunday Reads series is back after a really long time.


India's auto industry is stuck in a massive traffic jam. The industry has experienced its worst ever year in the last decade, with sales plunging 6.7% in FY'13, the biggest drop since FY'01 when the numbers went down by 7.7%. At one time, the industry was growing at over 20%, making it the fastest growing car market, after China.

The huge fall in sales reflects lower consumer demand mainly on account of lower overall economic activity and rising fuel and maintenance costs. This has added inventory and piled cost on the beleaguered auto industry, already reeling under discounts and price undercutting.


Bitcoins are created, or mined, when computers complete a complicated mathematical problem. Many individuals have pooled their computer power to ensure this mathematical work is completed more quickly.

The BBC has reported that the Bitcoin virtual currency lost half its value on Wednesday because of a panic sell-off.

From a high of $260 (£169) for each Bitcoin, the value dropped to about $130 (£84) in just six hours. The selling frenzy began as Bitcoin's main exchange, MTGox, struggled to keep up with the volume of trade in the virtual currency. MTGox said it was working hard to improve the exchange to avoid future trading problems.

Visual.ly has a video explainer on the Bitcoin issue.

(Read The Explainer: What is Fiscal Deficit?)

Before that, let me address a pertinent question: Where does the Government of India borrow from?

The three major sources of borrowing for the government of India are: (a) RBI, (b) foreign lenders (sovereign governments and international organisations like IMF and World Bank), and (c) from the general public of this country.

Contrary to popular perception, the government borrows most from the general public, through the issue of bonds (pretty much like fixed deposits).

What are the adverse consequences of Fiscal Deficit?
A high and rising Fiscal Deficit is bad for the general state of the economy, trade balance, and currency exchange rate.

A high Fiscal Deficit would mean the government’s borrowings are high. When the government borrows money from the general public, it creates demand for money.

Lending to government carries zero risk, as the government will not default on repayment. However, greater government borrowing would mean less money would be available for lending to industrial and other sectors of the economy. This would push up interest rates for the borrowers from the industry.

Higher interest rates would add to overall cost of production, thereby increasing cost of operations. This in turn would render business activity, like increased production and expanding operations, unviable. Hence, a lot of businesspersons would then opt out of such economic activity as they no longer find it profitable.

If due to higher interest rates businesspersons opt out of economic activity or close down plants, it would also reduce employment generation. This would in turn mean that the retrenched (those thrown out of jobs) and the unemployed do not earn income, thus reducing their purchasing power.

If purchasing power goes down, then their aggregate demand for goods and services would also go down. This in turn would also reduce industrial activity, thereby depressing overall economic scenario.

Sometimes the government of India would borrow from foreign sources. When the government is lent money, foreign exchange comes into the economy. This would increase the supply of the foreign currency, which in turn would be exchanged for the Indian rupee.

The rise in demand for the Indian currency would increase its value. Simply put, as foreign entities begin to exchange their currency for Indian rupee, the value of the Indian rupee will also increase.

This means that while earlier one U.S. dollar would have fetched Rs55, now it would fetch only Rs52. This would hurt exports and encourage imports. How?

As an an importer, in the past you were paying Rs55 per U.S dollar of import while now you are paying only Rs52. This means that your cost of operations would also go down.

However, if you are an exporter, then this would mean that you would earn less from your exports; like earlier you were earning Rs55 for U.S. dollar of export while now it is only Rs52!

If exports go down and imports go up, then the trade deficit will also widen, which in turn increases the Current Account Deficit.

In short, a high Fiscal Deficit is dangerous in every way possible: for general economic activity, employment generation, exchange rate, and trade balance.

In the next installment of The Explainer, I will focus on Current Account Deficit.

"I lost it," admits Rahul Gandhi


Today, i.e., 4 April, Rahul Gandhi delivered a talk at the Confederation of Indian Industry (CII). Normally, most speakers at these kinds of business forums are those whose views not just matter but more importantly, they reflect clarity of thought and vision.

I understand that it would be too much to expect Rahul Gandhi to exhibit these qualities. And at the CII, he did not exceed those expectations.

I think he forgot that he was speaking to industrialists who were looking for some clarity on economic policies of the UPA government. The Indian economy is experiencing its worst phase in the last decade or so, with both GDP and industrial production consistently nose-diving quarter after quarter.

Rahul rambled, fumbled, and made a mockery of a great PR chance. His PR managers must be having a harrowing time; either they are seriously dumb (or acting dumb) or they just do not know how to get it right for their VIP client.Or is it just a case of a bad student-client?

At one point in his talk, he mentioned the great "Jhansi Ki Rani" as "Rani ki Jhansi" and later, looking for a page of the ghost-written speech (by Jairam Ramesh?), he fumbled and said, "I LOST IT".

I think he lost it long back. Finally, he is beginning to be honest about it.

Watch the video below for the "I lost it" moment.