According to India’s Ministry of Finance’s report on external debt, India's external debt was at around $543 billion as at end-March 2019. In terms of external debt ranking, India ranks 24th in the world.

External debt of India is the money owed by India to foreign creditors. In simple words, it is the money we have borrowed which we have to pay back (along with the interest on it).

World’s Most Indebted Nations
With a debt of $20,263 billion, the United States is the world’s most indebted country, i.e., it has the highest external debt. In fact, the U.S.’ external debt is a tad lower than the combined external debt of the three next ranked countries: the United Kingdom (second rank at $8,491 billion), France ($6,470 billion), and Germany ($5,800 billion). 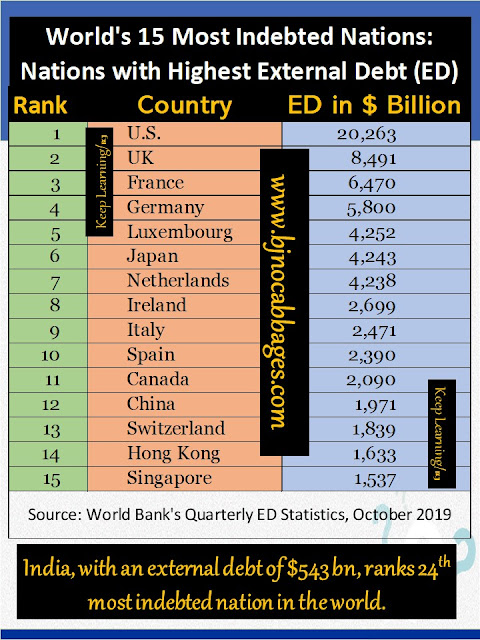 Types of Debts
As you know, based on maturity (when it becomes due for payment), there are two kinds of debts: long-term and short-term.

A loan with a maturity period of more than one year is termed long-term debt.

A loan with a maturity period of less than one year, i.e., this debt would become due for repayment in the next twelve months, is called short-term debt.

A government (just about any authority) prefers long-term debt for a fundamental reason: the longer the maturity period of the debt the lower the pressure on repayment.

In this context, it is pertinent to cite the breakdown of India’s external debt by maturity: about 80 per cent of the total external debt is long-term (i.e., about $434 bn of $543 bn). It is a no-brainer to say that the lower short-term debt works in the country’s favour.

• Multilateral credit – borrowed by the Government of India from institutions like the International Monetary Fund and the World Bank;

• Bilateral credit – borrowed by the Government of India from other countries (like Japan);

• External commercial borrowings (ECBs) – these are the borrowings of companies like Bharti Airtel from abroad;

• Deposits of Non-Resident Indians (NRIs). NRI deposits are treated as liabilities as they have to be repaid to the depositors, and

Sources of the external debt of $543 bn
The Reserve Bank of India has a lowdown on the debt mix of the Government of India. 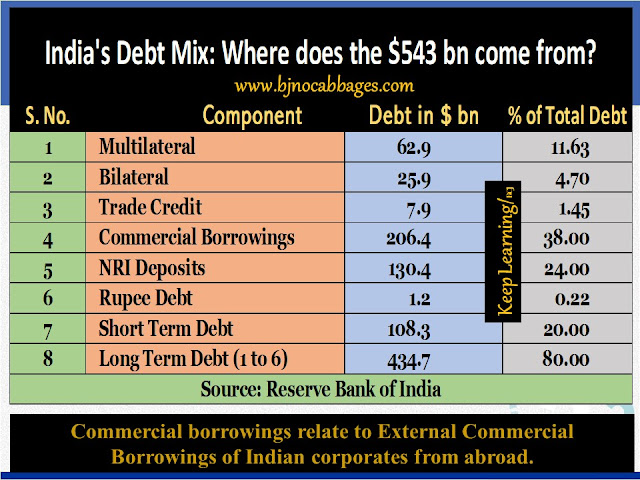 Vulnerability of the Indian economy
India is not vulnerable to any major or minor problem arising on the external debt front. The World Bank’s SDDS says that there is no vulnerability of the Indian economy to external shocks on the debt front. India’s foreign exchange reserves (of around $447 billion in November 2019) to external debt is around 82 per cent is within manageable limits.

The latest data on unemployment in India points to a significant surge. In fact, at 7.5%, the latest unemployment rate is the highest in 38 months, reveals the CMIE data. For calculation of this rate, the base is October–December 2015.

So, what is unemployment rate?

In other words, the ratio of the employed to the working age population is called the employment rate.

India has a total labour force of about 52 crore. A low labour participation rate means fewer people are willing to work.

In January 2016, the labour participation rate was 47%; it is down to 43% in October 2019, which effectively means that fewer people in the labour force are looking for and participating in work.

To put in perspective, of the 43% of the working age population willing to work, 7.5% are unable to find any work.

In light of the global slowdown and the deceleration in the Indian economy, the employment situation is unlikely to improve in the near future.
3 comments: