This is the first of the Gaza Explainers. 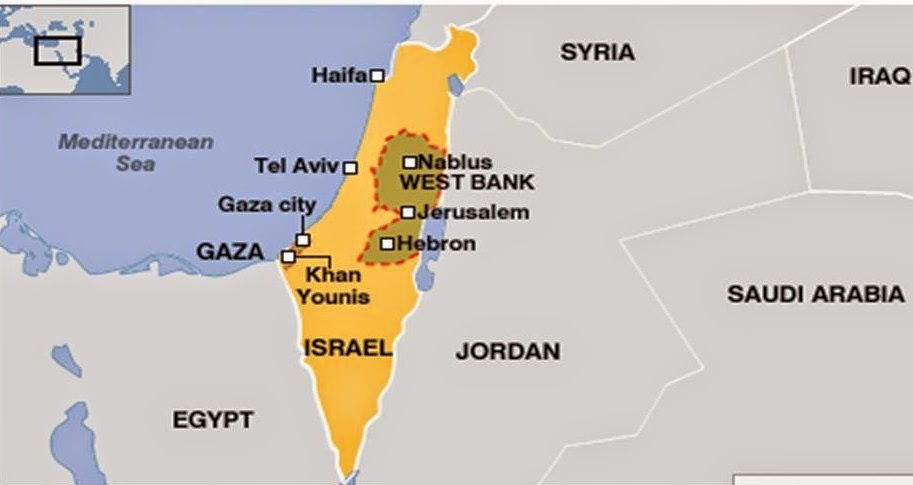 West Bank
At 3,620 sq. km., West Bank is the larger of the two Palestinian territories. The territory has a population of 2.44 million, with an additional 2.6 lakh Israeli settlers.

West Bank, located between Israel and Jordan, was occupied by Israel in the 1967 Six-Day War.

Currently, West Bank is under the control of Palestinian Authority (PA), which is a direct political rival of Hamas.

Gaza Strip
Gaza Strip is a narrow stretch of land (of about 360 sq. km.) located between Israel and Mediterranean Sea, with Egypt on the south. It has an estimated population of 16 lakh. Occupied by Israel in the 1967 Six-Day War, Gaza is controlled by Hamas.

The birth of Hamas can be attributed to the aspirations of extremist Palestinians to build a movement like Hezbollah, an extremist Shia Muslim outfit which operates out of Lebanon.
These extremist elements felt that there should be a similar home-grown Sunni movement, i.e., one that would operate from Palestinian soil.

What does Hamas think about Israel?
Hamas does not recognise the existence of Israel. In fact, Hamas denies the latter’s right to exist. One unique feature of Hamas is that it lays great emphasis on religion, which is in serious contrast to the secular Fatah party, which rules the West Bank.
Hamas’ charter explicitly mentions that the fundamental aim of its existence is the destruction of the State of Israel and the establishment of a sovereign .

In short, Hamas is a radical Sunni extremist group, which is anti-Israel and one which is fighting for an independent, sovereign Palestine.

Who supports Hamas?
From its inception and till recently, Hamas was funded by Iran and Syria and a range of Islamic charities, many of which are listed as fronts for Islamic terror groups, and are hence banned in many countries of the world.

The irony is that both Iran and Syria are controlled by Shia Muslims while Hamas is a radical Sunni Islamist organisation. Iran and Syria also do not recognise the State of Israel; Iran has repeatedly called for ‘wiping Israel off the map of the world’.

However, since the beginning of the civil war in Syria a lot has changed in the political equations involving Hamas.

For several years, Hamas ran a major office in the Syrian capital, Damascus. However, the deeply sectarian conflict in Syria has impacted the Hamas-Iran-Syria equation as well.

Short backgrounder on Syrian conflict
Syria is predominantly populated by Sunni Muslims while the president, Bashar al-Assad, is a Shia Muslim, backed by Iran (the world’s biggest Shia Muslim country).

As the Sunni rebel movement against the Shia ruling dispensation gathered pace, Hamas, a Sunni radical group, found itself in a difficult situation. In this sectarian conflict, Hamas’ natural sympathies lay with the Sunni rebels in Syria. Unable to digest the fact that its principal backers, Syria and Iran, are waging a relentless campaign against Sunni rebels, Hamas moved out of Damascus. It is also believed that Hamas was forced to move out of Damascus by the Syrian regime itself.

Hamas shifted base to Doha, capital of Qatar, a Sunni kingdom. Qatar is stridently anti-Iran and anti-Syria (read anti-Bashar). Today, Qatar has emerged as the principal political and financial backer of Hamas.

More short Explainers on the Gaza Crisis to follow.

sir can you provide extra links like Thomas freidman articles nytimes ,wapo along with the explainer

It was very crisp and informative sir..

thanks a lot sir .. i was waiting for your update on this topic ..

But sir, even when Human-Shielding by hamas is evident, why do people go mental on Israel's right/fight to exist?

1967 Six-day War: When you win a war, you win the land. That is not called "occupying (palestine)". Israel has Netanyahu; not Nehru. Isn't the information which is widely accepted a fact? Why are war rules altered?

Sir, i'm little confused about Hamas origin, is it Syria based or Palestine based? could you provide some more information on Hamas?