I became interested in African countries, like Zimbabwe, Namibia, and South Africa when I was around 13. A land's physical geography, history, people, culture, and polity have always fascinated me.

What do we know about Zimbabwe's political system?
The history of Zimbabwe since its independence from Great Britain in 1980 runs parallel to the history of the presidency of Robert Mugabe, one of the world's longest serving heads of state.

Under Mugabe, Zimbabwe has turned into an international basket case. Polity-wise, Mugabe has, with an iron fist, turned the country's sham democratic system into a one-man rule. There is press censorship, political repression, and arbitrary detention of political rivals. In fact, several of Mugabe’s biggest political rivals have been arrested on trumped charges, like treason.
Why did the Zimbabwean economy collapse?
The Reserve Bank of Zimbabwe (RBZ) stopped issuing currency in 2009; the last time the RBZ printed a currency banknote—100 trillion Zimbabwe dollars—was also its biggest banknote. The purchasing value of the currency had plunged so much so that it was issued with expiry date. By the way, the 100 trillion Zimbabwe dollars banknote was barely sufficient to buy ten decent meals. The RBZ has announced a new scheme to convert currency: a Zimbabwean would get one U.S. dollar in exchange for 100 trillion Zimbabwe dollars. 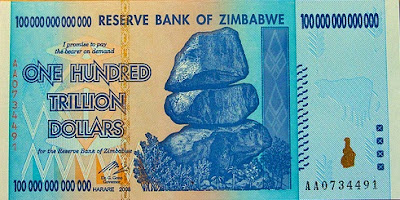 Robert Mugabe has systematically, and, to the dismay of ordinary Zimbabweans, 'successfully' destroyed the country's economy. He pursued radical and arbitrary land reforms, which saw the transfer of land from white farmers to blacks. Like his other corrupt policies, the end beneficiaries here were not the poor Zimbabweans but Mugabe’s political supporters. (Come to think of it, politicians everywhere are the same.)

Let me add that while the white farmers had great interest in farming (it was their livelihood), the blacks who secured control of such land (from the whites) had little interest in farming; farming collapsed and the hitherto employed farm labourers (almost exclusively blacks) were rendered unemployed. No employment (meaning no income generation) and steep decrease in farm output (leading to high inflation) have piled untold misery on the hapless Zimbabweans.

To this add another economy misstep: until early 2009, the RBZ printed money to fund the high budget deficit, which caused hyperinflation. Today, Zimbabwe has the world’s highest inflation rate – about 500 trillion per cent!

As hyperinflation began to eat into the purchasing value of the Zimbabwean dollar, the Robert Mugabe Government allowed the U.S. Dollar, South African Rand, and the Botswana Pula to be used as legal currency in Zimbabwe.

At the beginning of 2015, the Zimbabwean Government expanded its basket of acceptable currencies to include the Indian Rupee, Chinese Renmimbi, Australian Dollar, and the Japanese Yen.

Foreign investment has dried up. Unemployment is peaking. Power supply is almost non-existent. Infrastructure is crumbling. In short, Robert Mugabe has destroyed Zimbabwe.

So, this is the story behind the currency crisis in Zimbabwe.

Excellent read!! :)
sir can you please throw a light on oil and gas sector like which are oil refining cos, oil marketing cos and how indian govt regulates oil prices

Great explanation and easily understood.
Sir, I request you to please post a similar article on Greece.

I couldn't understand why ,Brendon Taylor,one of the most celebrated batsman of zimbabwe,quit playing for zimbabwe nation soon after the 2015 worldcup and joined the English county,following his concerns of his financial future(he was paid only 250$ for playing in the worldcup,despite being one of the best players in the tournament).

Now i get a clear picture of the nation's economic turmoil.