Yesterday, I posted an Explainer on the Iranian political system. Today's post focuses on the sanctions imposed by the United Nations, the United States and the European Union. It also focuses on the impact of such sanctions on the floundering Iranian economy.

A Brief History of Sanctions against Iran
Punishing Iran for its consistent refusal to stop its nuclear weapons programme, the United Nations imposed punitive sanctions, which are in addition to the sanctions imposed by the European Union and the United States. 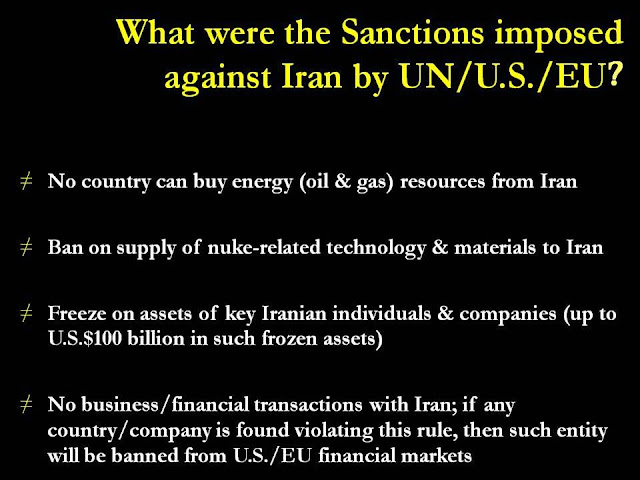 The UN sanctions prevent all members and international financial institutions from entering into new commitments for grants, financial assistance, and concessional loans, to the , except for humanitarian and developmental purposes. The UN ratified four rounds of sanctions against between 2006 and 2010; these sanctions include a ban on the supply of heavy weaponry and nuclear-related technology to , a block on Iranian arms exports, and an asset freeze on key individuals and companies, and mandates cargo inspections to detect and stop ’s acquisition of illicit materials.

The EU imposed its own restrictions on trade in equipment which could be used for uranium enrichment and put in place an asset freeze on a list of individuals and organizations, who it believed, were helping advance the Iranian nuclear programme. In 2011, the EU also banned the export to Iran of key equipment and technology for the refining and production of natural gas.

As for the sanctions, they have been in place since 1980. The two countries have had no diplomatic relations since 1980 after the embassy in was stormed by Islamist students during the Islamic Revolution. (The 2012 Oscar Award winning film, Argo¸ revolved around this incident.) The U.S. imposed successive rounds of sanctions for Iran’s support for international terrorism, human rights violations and refusals to co-operate with the IAEA.

The sanctions also ban almost all trade with , including purchase and sale of energy resources. However, the sanctions carry exceptions only for activity “intended to benefit the Iranian people”, including the export of medical and agricultural equipment, humanitarian assistance and trade in “informational” materials such as films.

Impact of sanctions in a nutshell 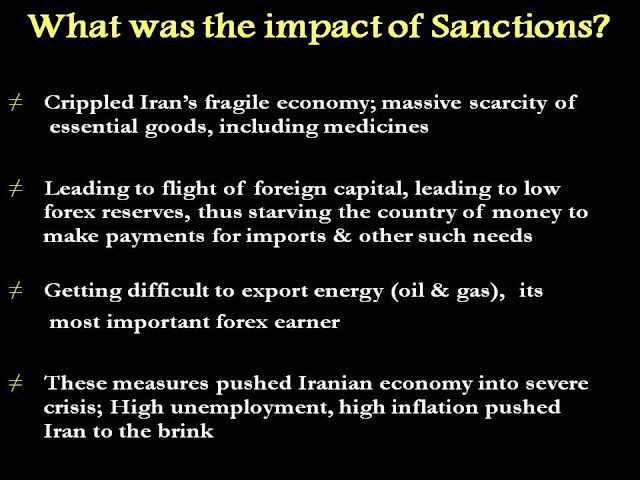 As always I have used pretty simple language.
This weekend, either on Saturday or Sunday, Early next week I will post the third part of this four-part series on the Iranian nuclear deal.

It is very simple and easy to understand!