The Explainer: What is Fiscal Deficit?

(Read: Understanding the Budget - Part I and Part II)

This post will dwell on the idea of Fiscal Deficit, a factor which is giving the Finance Minister of India the jitters.

What is Fiscal Deficit?
Fiscal Deficit is defined as the difference between the government's total expenditure and the total non-debt creating receipts. 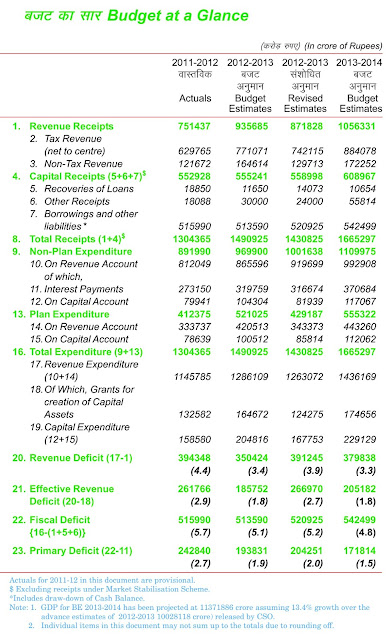 Revenue Receipts would include both tax and non-tax revenue of the Government of India (GoI).

What is tax revenue?
This refers to revenue that the GoI gets by way of collecting taxes, like Personal Income Tax, Corporate Tax (charged on incomes of companies), Central Sales Tax and Service Tax.

What is Non-tax revenue?
This would include Stamp Duty and Dividends earned from Public Sector Units (PSUs). Dividend is the return on capital invested by the government in PSUs.

Sometimes the government of India receives money that it would have lent to some country/organisation in the past. When such money is received, it is recorded under the ‘Recoveries of Loans’ head.

In short, fiscal Deficit is the total borrowing of the government of India to fund the allocations and expenditures listed in the Union Budget.

In the accompanying table, the Revised Estimates for 2012-13 show a Fiscal Deficit of Rs5,20,925 crore. In other words, what this figure means is that the Government of India is borrowing this huge amount of money in 2012-13! Yes, you got it right: a total borrowing of mind-numbing Rs5.2 lakh crore in one year!

Fiscal Deficit is usually expressed in terms of percentage of the country’s Gross Domestic Product (GDP).

So, to say that we are living way beyond our means would be an understatement. While Fiscal Deficit is bad, one that is high could spell doom for the economic growth of the country. The next post will focus on the adverse consequences of Fiscal Deficit.

Thanks for sharing about Fiscal Deficit........

Sir, can you give examples of some debt creating revenues?

Any idea on why 7. Borrowings and other liabilities deducted from total expenditure in calculating fiscal deficit?

why it wasn't deducted*?