Over the years, several people have asked me a pertinent question: Is this the money the Government of India owes to external agencies like the World Bank (WB) and the International Monetary Fund (IMF)?

Well, the answer is complicated. 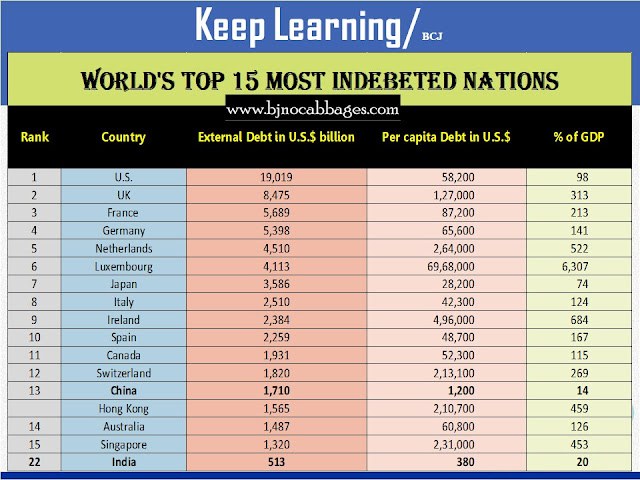 To understand external debt, let’s use the traditional Q&A method.

(b) The remaining 19 per cent (U.S.$97.6 billion) is short-term external debt. This means this debt would come up for payment in the next twelve months.

Define debt by types of maturities.
The maturity of a loan relates to its repayment period, i.e., when it becomes due for repayment.

Based on maturity, there are two kinds of loans: long-term and short-term.

A short-term debt has a maturity period of less than one year, i.e., this debt would come up for repayment in the next twelve months. This debt, in the case of external debt, includes both the principal as well as interest on such loans. In other words, short term external debt includes short term debt by original maturity as well as long term debt.

• Multilateral credit – borrowed by the Government of India from institutions like the International Monetary Fund and the World Bank;
• Bilateral credit – borrowed by the Government of India from other countries (like Japan and Germany);
• External commercial borrowings (ECBs) – these are the borrowings of companies like Reliance Industries from abroad;
• Deposits of Non-Resident Indians (NRIs). NRI deposits are treated as liabilities as they have to be repaid to the depositors, and
• Foreign Institutional Investment (FII) – investment by foreign fund houses (like mutual funds) in India’s stock markets and government securities.

As mentioned, India’s external debt is U.S.$513.4 billion. So, does it mean the Government of India borrowed all this money?
Yes, but just a part of it. Government debt is also called ‘Sovereign’ debt.

What are the components of Government debt?
Of the total Government debt of U.S.$108.9 billion,
• 42.1 per cent has come from multilateral agencies (like the World Bank and the International Monetary Fund);
• 18 per cent came from bilateral creditors (like Japan). In fact, Japan was the single biggest lender to India – nearly 79.7 per cent of bilateral credit came from Tokyo, followed by Germany at 10.9 per cent and Russia (5.3 per cent), and
• 39.9 per cent was sourced from Other Sources (like foreign institutional investment in government securities and defence debt).

India’s external debt to GDP ratio is 20.4 per cent – among the lowest in the developed and developing world. For the U.S., it is nearly 100 per cent while it is 14 per cent for China.

India’s foreign exchange reserves to total external debt is also good – 74.8 per cent (based on World Bank data for 2016).

India is not vulnerable to any major or minor problem arising on the external debt front.

I don't know why the US has such a high debt, in spite of it being a developed country.

Very glad to know that India is not in a bad position financially on the global front.

Two major factors: the savings rate in the U.S. is very low and the consumption (spending) is very high. Consequently the country keeps borrowing to sustain its high spending.

Sir,
Will this also includes the debts made by the individual state debts..

informative and knowledgable article sir, can you please tell me know how much is it impacting a common Indian like us?

Thank you so much sir.It's very helpful.

Could you also let us know during which govt tenure did the highest borrowing or closure happen?