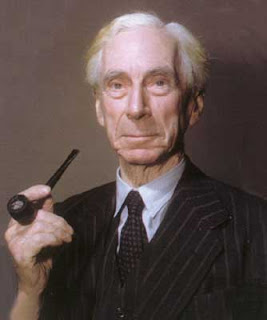 Bertrand Russell (1872-1970) was a British philosopher, mathematician, and much more. He was awarded the Nobel Prize for Literature in 1950.

A prolific writer, he authored several ground-breaking works, like Principia Mathematica (with A. N. Whitehead), Why I am not a Christian, On Denoting, and The Analysis of Mind.

Russell described himself both as an agnostic and an atheist. For most of his adult life Russell maintained that religion is little more than superstition and, despite any positive effects that religion might have, it is largely harmful to people. He believed religion and the religious outlook (he considered communism and other systematic ideologies to be forms of religion) serve to impede knowledge, foster fear and dependency, and are responsible for much of the war, oppression, and misery that have beset the world (This paragraph is taken from Wikipedia).

On the Brainpickings Website, I found this set of Ten Commandments for Teachers that Russell outlined:


1. Do not feel absolutely certain of anything.

2. Do not think it worth while to proceed by concealing evidence, for the evidence is sure to come to light.

3. Never try to discourage thinking for you are sure to succeed.

4. When you meet with opposition, even if it should be from your husband or your children, endeavor to overcome it by argument and not by authority, for a victory dependent upon authority is unreal and illusory.

5. Have no respect for the authority of others, for there are always contrary authorities to be found.

6. Do not use power to suppress opinions you think pernicious, for if you do the opinions will suppress you.

7. Do not fear to be eccentric in opinion, for every opinion now accepted was once eccentric.

8. Find more pleasure in intelligent dissent than in passive agreement, for, if you value intelligence as you should, the former implies a deeper agreement than the latter.

9. Be scrupulously truthful, even if the truth is inconvenient, for it is more inconvenient when you try to conceal it.

10. Do not feel envious of the happiness of those who live in a fool’s paradise, for only a fool will think that it is happiness.


My favourite ones are the first and ninth commandments; While I do not agree with all, especially the fifth commandment, the list still works as a defining set of guidelines for teachers.