In the wake of the twin crises of Eurozone economy and U.S. debt ceiling, the concept of credit rating has come into sharp focus. This week's The Explainer features a Q&A on credit rating.

What is Credit Rating?
Any form of debt (i.e. money borrowed) has to be repaid. So before you lend money, you would like to perform a background check on the borrower’s repayment capacity, i.e. ability and willingness to repay the debt. In other words, this background check is used to test the creditworthiness of the borrower.
Based on the result of the background check, a credit rating is used to assess the creditworthiness of a borrower or issuer of debt.  This kind of credit rating is assigned by a credit rating agency.
Name some famous Credit Rating Agencies.
Globally, there are three famous credit rating agencies: Standard & Poor’s (S&P), Moody’s, and Fitch. ICRA, CRISIL, and CARE are some of the credit rating agencies in India.
On what basis is Credit Rating assigned?
These agencies assign ratings to issuers of debt, such as companies and governments. To arrive at a credit rating, the agencies evaluate not only current and historical information but also assess the potential impact of foreseeable future events on the borrower’s capacity to repay the debt.
While assigning a credit rating to a country (like India), the focus is on political stability, monetary stability, impact of global events on the country’s economic and political stability, and overall debt burden.
When it comes to rating a company for its creditworthiness, the factors taken into consideration are:  company’s past and current performance, industry profile, company’s position in the industry and how does it compare with its competitors in the industry, revenue model and cash flow, projected earnings, current debt load, corporate governance, and accounting practices.
If a country or company has AAA rating, what does it mean?
The AAA (triple A) rating is the highest possible rating that can be given to a country or company. S&P says that it gives AAA when there is an “extremely strong capacity to meet financial commitments” and is the least likely to default on its debt payments.
The major benefit of AAA rating is that it helps a country or company borrow at low rates of interest. This is because lenders know that lending to such a borrower comes with low risk as it would almost not default.
Important to remember:
Credit ratings reflect relative opinions about the creditworthiness of a borrower, from the strongest (AAA) to weakest (D).
For example, a company or country that is rated 'A' is only less likely to default on a debt payment than a country or company with a 'BBB-' rating. It is not that it will not default, but only that the possibility of a default is less likely than those rated below it.

(a) Types of Credit Ratings and what they mean: 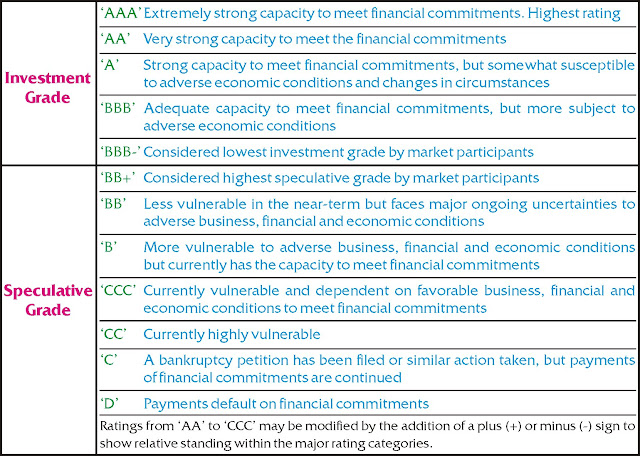 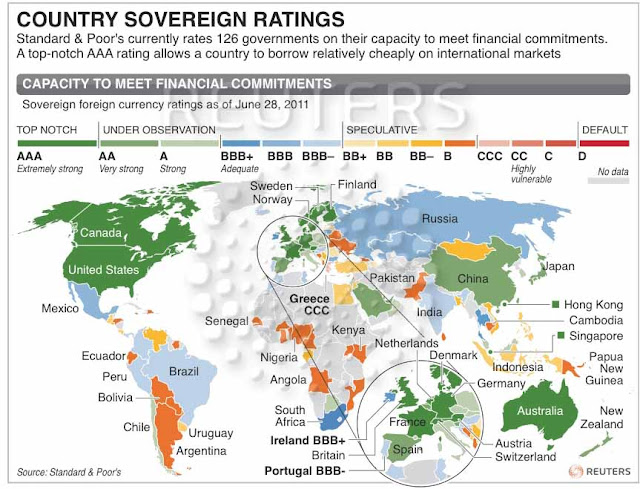 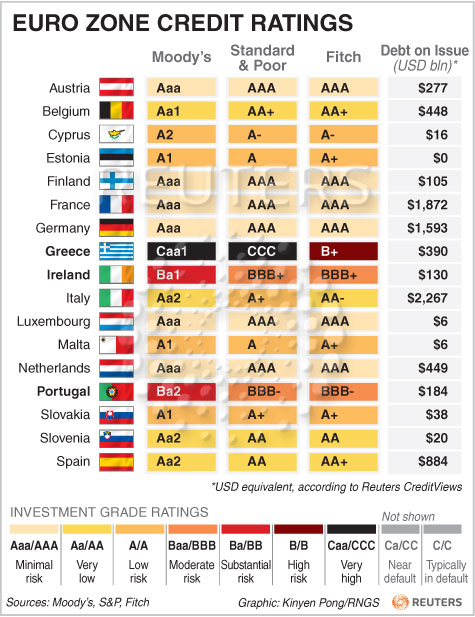 The Greece Mess
As you can deduce from the last graphic, Greece is on the verge of a default while Portugal runs a substantial risk of default.
For want of space, I will share only a short backgrounder behind the credit rating assigned to Greece.


Just look at Greece's financial condition: its external debt is at U.S.$380 billion, which is 142% of its GDP! Its economy is not doing well; in fact, its GDP contracted by 10.2% last year (i.e. its GDP fell below previous year's amount). Some of its debt was due for payment; however, it does not enough money to pay back the huge debt it has accumulated over the years. Hence it had needed bailouts (emergency funds) to overcome the debt payment crisis. In fact, you could apply, more or less, the same reasons for both Ireland and Portugal.
I know this was a difficult topic to deal with; but I am sure that since I have used pretty little jargon, you will understand most of this complex stuff.
(Please select your reaction to this post; see below.)

1)Will countries which is in the verge of a default( say US) get less debts than a country like India? and where do the countries borrow from?
2)Why do ratings have such an impact on country's economy and why does a super power like US worry about the ratings of some S & P or the Moody's

Sir,
could u also explain about GDP and its impact on economy especially in india

the information was adequate to get an overall idea about rating sir. very informative

very informative post sir.I have a small doubt.Now the credit rating of US is AA+ . Its not so bad.But relatively its bad than its previous performance.Does it mean US is on verge of DEFAULT?

@Swetha, the U.S. is not on the verge of default; in fact, it is impossible, given the structure of its economy, that it will ever default on its debt payments.

An "AA+" rating is defined by S&P as follows: "An obligation rated 'AA' differs from the highest-rated obligations only to a small degree. The obligor's capacity to meet its financial commitment on the obligation is very strong."

@madhusudhan rao US is not on the verge of default its rating is AA+ which is extremely strong capacity to meet financial commitments from the above post where as india's rating is BBB- which is more vulnerable on getting default than US.the countries(like US) borrow from other countries like china,japan etc.Recently india lended an amount of 8000 CR to one of the european countries
to your second question the answer is the ratings have an impact on country's economy if the ratings decrease the status of the country getting to default increases which implies that the country's economy is weak as it is unable to pay is's debt's it applies to any country it may be US the so called super power or any country for that matter

i hope this might help you a little bit

1. Countries borrow from IMF and world bank. Also, they borrow through bonds(Please read Bharat Sir's explainer on Bond for details).
2. That is because of the simple reason of borrowing. The authorities(IMF, World bank) are less inclined to lend in case of low rating, so higher the rate of interest and higher the financial liability.

Bharat Sir, there is a small spelling mistake in 5th line from the end(it does not- 'HAVE' is missing). Given the beauty and simpilcity of the post, I could not resist pointing it out. Hope u dont mind. :)

sir, i observed that you post replies only to questions asked by female readers....