On April 13, North Korea tried to launch the Unha-3 rocket, which broke up and crashed into the sea shortly after the launch. The purported aim of the rocket was to put a satellite into orbit. The rocket was launched to mark the occasion of the 100th birth anniversary of the country's founder President, Kim Il-Sung,

In a very rare admission, North Korea admitted the failure of the rocket launch; the failure will rankle the North Korean leadership as the rocket launch had been portrayed as the reflection of the country's technological advancement. In fact, this was the third attempt by North Korea (first attempt was in 1998 while the second attempt was made in 2009) to put a satellite into the orbit; incidentally, all three ended in failure.

The launch drew international condemnation, especially from the U.S., South Korea, and Japan, with many calling it a violation of international missile test treaty violation.

I have, in the past, written on the North Korean dictatorship. Here's a revisit to this topical issue.

Most isolated
Politically the world's most isolated country, North Korea has working relationship with only two countries – Russia and China, both of which share land border on its north. It is ruled by the hyper-reclusive Kim family.

NK turned communist under the Soviet influence during and after the World War II (1939-45). It fought the South, which, under American influence, adopted democracy and free market economic system. At the end of the Second World War, the U.S. and the USSR mutually agreed that the 38th Parallel (38 degrees North Latitude) would form the boundary between the two Koreas.

The Korean War
Early on, the extremely varied political ideologies of the two Koreas led to the  Korean War (1950-53), which culminated in establishing intense hatred in the North for the South and utter contempt and fear in the South for the North. A cursory glance at the death figures in the Korean War will give you an overview of the catastrophe: an estimated 16 lakh NK soldiers, about 28000 American troops, and around 4 lakh South Korean soldiers are said to have died.

Currently, Kim Jong-un is the new leader of the communist nation. He is the son of Kim Jong Il, who died in December last year, and the grandson of Kim Sung, who was a puppet ruler installed by the Communists powers in Moscow and Beijing. In short, the Kim Family controls the country as if it were its fiefdom.


Orwellian State
Like all communist states, North Korea is also a one-party state, with no elections, no free press, no freedom of expression, and no concept of private property, all characteristic of an Orwellian State.

(The word Orwellian comes from the name of George Orwell, the author of the political classics, 1984 and Animal Farm. The reader will appreciate that in the book 1984 Orwell describes the idea of Big Brother, i.e. someone who is all-pervading and watches every move; it is also true that Bigg Boss is a variant of Big Brother!).

No dissent is allowed; anyone seen criticizing the leadership is sent to the numerous concentration and labour camps that dot the country's landscape. It is believed that today there are more than half a million people imprisoned in these death camps.

The pursuit of nukes
As you know, North Korea is a nuclear weapons state; apart from a declared nuclear weapons program, it is suspected of running biological and chemical (links to NTI Web site) weapons programs. It has a large arsenal of missiles and is seen as a major proliferator such weapons technology.  It is an open secret that Pakistan got missile technology from NK after the former bartered nuke weapons technology in return.

While NK spends millions of dollars on weaponisation programs, it does nothing to mitigate the sufferings of millions of its citizens, who are burdened by lack of employment, income, and economic freedom. It is estimated that over 1.9 million North Korean citizens have died of starvation in the last two decades.

The international community, led by the United States, has been trying to get the North into giving up its nuke weapons program in exchange for multibillion dollar economic aid; however, several rounds of six-party talks (North Korea, South Korea, Japan, China, Russia, and the U.S.) have yielded no positive result in the face of an intransigent and capricious North Korea.

No note on NK can be complete without an aside on the relationship between Japan and the two Koreas.

While economics has, to a large extent, helped normalise relations between South Korea and Japan, it is the North that continues to rile against Japan. In fact, a couple of years back, the North Koreans tested a long range missile that flew over Japan!

Relationship between North Korea and China

China is the most important all-weather friend of North Korea. Apart from political and ideological interests, China tries to keep the Korean cauldron boiling because that helps it achieve strategic goals: China has historically been anti-Japan (just like the two Koreas).

As the dictum goes, enemy's enemy is a friend and so is NK a friend of China. NK's shrill and persistent belligerence keeps South Korea and Japan on tenterhooks which serves the purpose of the Chinese!

Also, NK can not concede anything in the six-party talks without China's approval. In fact, the Chinese are as worried about the new puppet in Pyongyang as the U.S., Japan, and South Korea.

China's game plan is simple: if any positive change has to emerge in NK, it will have to be through Beijing. This way China holds the trump card on the strategic cards table.

Check out this Reuters infographic, which features a comparison between the two Koreas. Also, you will find that NK, which is perpetually energy-deficient, is completely dark, except for the bright spot of the capital, Pyongyang. 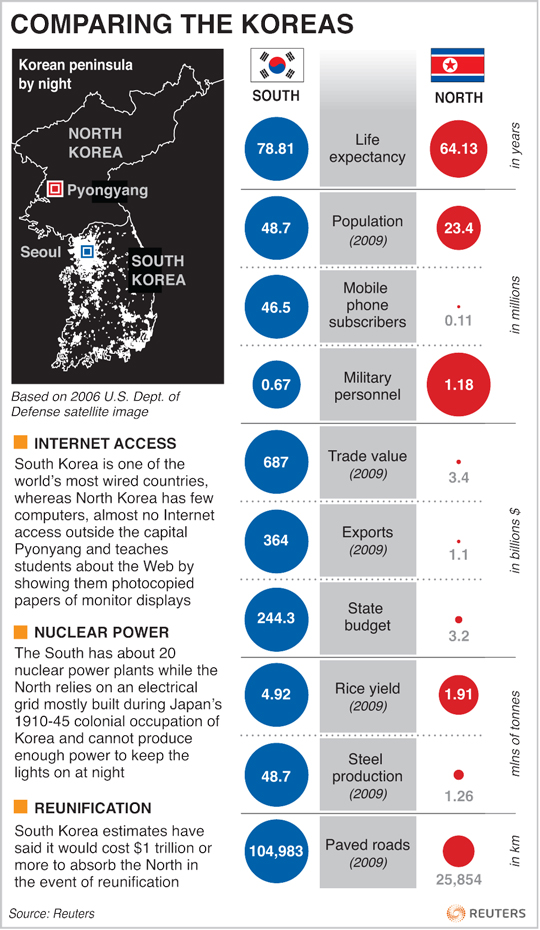 THANK YOU VERY MUCH FOR THE POST
The figures for North Korea are really very very disastrous in every aspect, isn't there a international organization or something which looks into these matters, as the living standards of NK is disgusting with no electricity, mobiles phones, internet part is pathetic.

I have a request Sir
can you please throw some light on how a communist country,

capitalist and other forms of goverment rule the nation

The facts have been highlighted really well sir. And a great insight into the Korean saga.

Sir, I have a request- Can you write about the reason why Americans lost the Vietnamese war. Due to the geographical conditions of Vietnam. If you could, please do and if you already have, I'd be delighted if you could give me a link to it!

Sir, please explain the Finmeccanica scam from the beginning in simple words.

One of the most insightful blogs that I ever came across on internet which explains the topic so effortlessly.
Keep the good work. :)