Economic Activity and the Super Rich 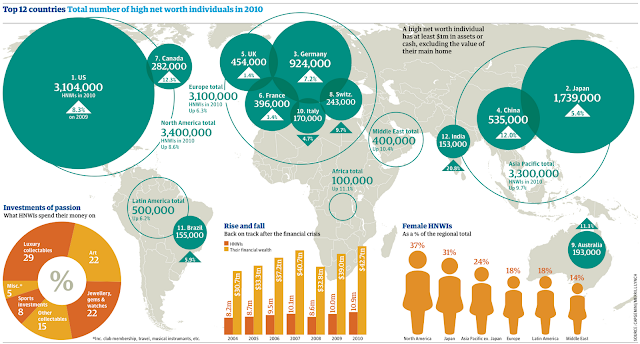 No, if you go by the infographic above. According to the annual world wealth report by Merrill Lynch and Capgemini, the wealth of HNWIs around the world reached U.S.$42.7 trillion in 2010, rising nearly 10% in a year and surpassing the peak of U.S.$40.7 trillion reached in 2007, even as austerity budgets were implemented by many governments in the developed world.
India has over 1,53,00 millionaires, a 20.8% rise from previous figure, making it the country with the 12th largest number of the super-wealthy.
So the world's richer are getting richer by the day. I know Anil Ambani will beg to differ with me!
(Source for the infographic: Guardian)