Sometimes a single picture can reveal more than a thousand-word story.

Today's Daily Chart on The Economist Web site carries a terrific feature: the global equivalents of Indian states - in terms of GDP, GDP per person, and population.
You can access this interactive feature here.
A couple of years back, I found a similar map from Strange Maps, a Web site now renamed 'big think'. Though the map below is based on 2007 GDP figures, it still reveals a lot about the size of the GDP of these states and their global equivalents. 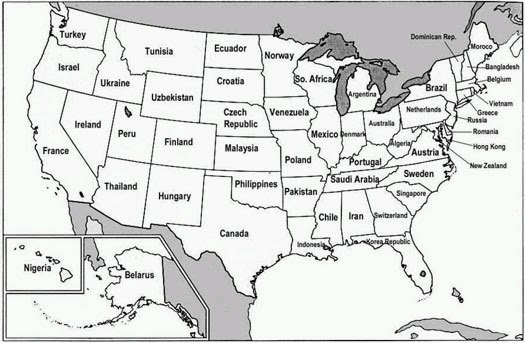 If we take the 2010 GDP figures, then the GDP of India at U.S.$1.4 trillion would be almost equal to the GDP of Texas, but would be less than the GDP of California (U.S.$1.8 trillion)!
In the next few days, I will post a few more 'equivalents' pictures.

nice statistics... but m sure our black money would be equal to that of Texas or even beat California or soon it will in black sooner than in white........... sorry state of affairs!!!

Thanks for economist link - that puts a whole lot info into 1 page...

Having seen the interactive feature in 'The Economist' today morning, I was reasonably confident that this would find a laudatory mention in your blog. And Voila! I am happy that I have been able to anticipate it.

The one on US states indeed is consummately new to me. :) Thank you sir.

Thank you, Dheep, for anticipating me!

I found the feature highly informative; hence, thought of sharing with you guys :)

This is in line with my fundamental approach to teaching: 'there should not be any difference in terms of access to resources that my students and I have to learn.'

Really nice representation. Helps to get a better perspective of things.

Thanks for sharing it sir...

Thank you for your reply, and very happy and elevated to read the inspiring and edifying principle you follow with regards to teaching. :)