India is paying dearly for the Central Government's dithering on crucial economic reforms and general lack of governance. The lack of any interest in the UPA to push for measures that can contribute to enhanced economic growth, is a matter of serious concern.

Rather than work toward improving economic and social welfare, the UPA (read Congress) is busy firefighting a series of scams: 2G, CWG, Abhishek Manu Singhvi, and Bofors. It is only expected that when it comes to survival, the UPA will only be bothered about protecting its turf and political votebank.

Yesterday, Standard and Poor's (S&P), a leading credit agency, lowered India's rating outlook to negative and warned of a downgrade in two years if there is no improvement in the fiscal situation and the political climate continues to worsen. 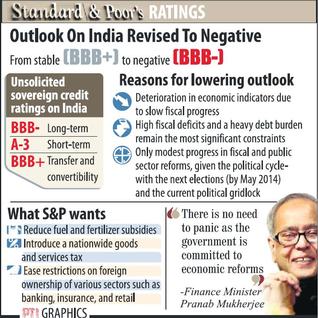 The lowering of outlook from Stable (BBB+) to Negative (BBB-) is expected to make external commercial borrowings expensive for Indian corporates. It may also have implications for the capital market.

S&P said that, "the outlook revision reflects our view of at least a one-in-three likelihood of a downgrade if the external position continues to deteriorate, growth prospects diminish or progress on fiscal reforms remains slow in a weakened political setting".

Further, it said that the negative outlook signals likelihood of the downgrade of India's sovereign within the next 24 months, especially "if its external position deteriorates, its political climate worsens, or fiscal reforms slow".


What is Credit Rating? Any form of debt (i.e. money borrowed) has to be repaid. So before you lend money, you would like to perform a background check on the borrower’s repayment capacity, i.e. ability and willingness to repay the debt. In other words, this background check is used to test the creditworthiness of the borrower.

To understand what credit rating is all about (and what this kind of a revision means), read The Explainer: Credit Rating, which first appeared on this blog on August 5 last year.