Every week at least twice I publish lists of interesting reads under the title, The Best of Politics, Economics, & Ideas.

Today, I am sharing just three articles; I am sure they will make for some really interesting readings.

At CIA, a convert to Islam leads the terrorism hunt
Colleagues describe Roger as a collection of contradictions. A chain-smoker who spends countless hours on a treadmill. Notoriously surly yet able to win over enough support from subordinates and bosses to hold on to his job. He presides over a campaign that has killed thousands of Islamist militants and angered millions of Muslims, but he is himself a convert to Islam. Read the complete article on the Washington Post Web site.

Global warming close to becoming irreversible
The world is close to reaching tipping points that will make it irreversibly hotter, making this decade critical in efforts to contain global warming, scientists warned... As emissions grow, scientists say the world is close to reaching thresholds beyond which the effects on the global climate will be irreversible, such as the melting of polar ice sheets and loss of rainforests. Read the complete article on the Scientific American Web site.

Want to know your history of activity on Google products?
Google has announced an interesting feature called Account Activity recently. It sums up what you have been doing with Google products each month, including whom you have mailed most or which places you have visited etc. Check out how to find out your Google activity on the NDTV Gadget site.

Deve Gowda is in news, for all the wrong reasons, like always. When I was in college (yes, I did go to college!), I once participated in a 'Sell This To' contest. I was asked to sell 'sleeping pills to Deve Gowda'. How tough it is? Well, selling a refrigerator to an Eskimo is easier. Check out this twitpic which I found here. 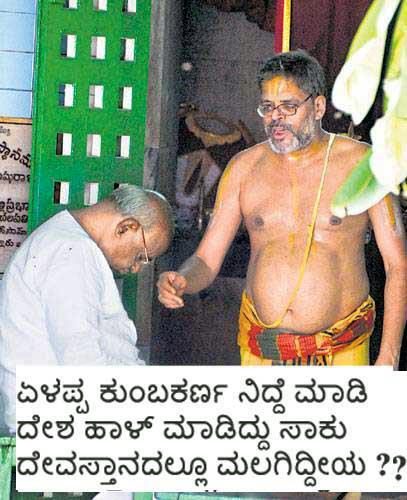