The Moral Bankruptcy of Rahul Gandhi 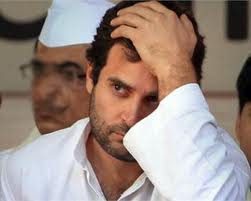 Rahul Gandhi is missing in action. He has not been in news ever since the Congress party received a massive drubbing in recently held elections to the UP Assembly. In his post-UP election guest appearance before the media, the 'PM-in-Waiting', as his sycophant, Digvijay Singh designates his master, delivered a two-minute terse rehearsed speech, owning up responsibility for his party's disastrous performance.

Rahul went around the state for several months before the elections. During this time, he made highly publicised visits to Dalit households. His army of myrmidons blared from the rooftops about the great sacrifices made by their 'Rahulji', like eating from earthenware owned by the host Dalits and sleeping on the floor.

Forget about winning an absolute majority, as claimed by Rahul's I-am-your-biggest-follower, Diggy Raja, the party finished fourth, with just 28 seats (a mere six more than its 2007 tally). As if the misery was not complete, the party could win only two out of ten constituencies in the Gandhi family's pocket-boroughs of Amethi and Rae Bareli.

In fact, in Sonia Gandhi's Rae Bareli, Congress did not win any seat out of five assembly constituencies. These two Lok Sabha constituencies saw high decibel campaigns by the entire Gandhi clan: Sonia, Rahul, Priyanka, and Robert Vadra (Priyanka's husband). Even if one looks at these results dispassionately, they represent a resounding slap on the face of the Gandhi family.

Even when we look at Rahul's performance in the Parliament, he has failed as an MP too. He rarely has spoken forth on any matter of public importance; all he does is parrot a few lines from prepared text (drafted by his band of loyalists), like the time he delivered an emotional talk on the sufferings of the widows of Vidharbha, a backward region in the Congress-NCP ruled state of Maharashtra. Remember Kalavathi?

The Congress' 'youth icon' rambled in the Lok Sabha on how his government will wipe the tears away from the eyes of widows, like Kalavathi. After several months and a plethora of promises of help later, poor and deprived women like Kalavathi are still struggling. Even today Kalavathi and her kind are struggling to make ends meet to feed her family and herself. fos great performance. I suggest you read this India Today story on the sorry plight of the widows of Vidharbha.

So much for the youth icon's concern for the poor of this nation.

When Rahul accused the Elephant in Lucknow (read Mayawati) of massive corruption, he looked sorry for he forgot how his Congress-led UPA coalition is widely seen as the fountainhead of some of the biggest scams in independent India: CWG scam, masterminded by Congress MP, Suresh Kalmadi, and the Rs1.76 lakh crore 2G spectrum scam, just to mention two.

If he is so distressed with the plight of the poor and marginalised, then what is he doing about the impoverished weavers in Congress-ruled Andhra Pradesh and the indebted farmers in Maharashtra? Where was he when the land and drug mafia were gobbling up in Congress-ruled Goa? Where was he when YSR and his son YS Jagan were amassing hundreds of crores in ill-gotten wealth? It does not take a genius to figure out why corruption cases have been slapped NOW against Jagan; after all YS Jagan has floated a rival party, which poses a strategic threat to the Congress' electoral chances.

India's Outlook magazine has recently published 25 Questions for Rahul Gandhi. Here is a selection of three pertinent questions from the list.

Rahul Gandhi is shallow, vain, and unfortunately surrounded by people who are happy to keep him in his make-believe world. Given the Ostrich-like attitude of the Congress leadership, it is unlikely that the dynastic-oriented party will ever learn from its mistakes; today it has nothing to offer to the country except for the moral bankruptcy of its leadership.

gr8 read :)))
wonder what MR! Rahul gandhi did to help kalawati leave alone similar widows of Maharashtra :D
hoping for the pedigree of big-mouths to come to an end soon ...